Please note that the nasal spray method is NOT as effective as the injection method,

because the nasal passage only has a 40-50% absorption rate,

however they are a viable alternative and users still achieve amazing results without injections.

Melanotan II was developed by researchers at the University of Arizona College of Medicine. Melanotan II is an analog of the peptide hormone alpha-melanocyte stimulating hormone (α-MSH), this hormone has allegedly provided a therapeutic tan with the ability to lower the risk of skin cancer, (MSH) also plays an important role in regulating sexual arousal in men and women. Melanotan II has the additional effect of decreasing body fat mass. Melanotan II It is a cyclic lactyam analog of alpha-MSH with the amino acid sequence Ac-Nle-cyclo[Asp-His-D-Phe-Arg-Trp-Lys]-NH2.

A MC analog, Melanotan II (MTII), can enhance sexual function in human males (erectile activity) and females (increased levels of sexual desire and genital arousal). Unlike other sexual-enhancement drugs, MTII works at the level of the brain, thus eliciting a rather natural sexual response with minimal or no undesirable side effects. The actions of the peptide were discovered accidentally while studying the effects of the peptide and related analogs on human skin pigmentation (tanning).

Melanotan II, PT-141, a cyclic heptapeptide melanocortin analog, was evaluated following subcutaneous administration to healthy male subjects and to patients with erectile dysfunction (ED) who report an inadequate response to Viagra. The erectile response induced by PT-141 was statistically significant at both doses. PT-141 was safe and well tolerated in both studies. The erectogenic potential of PT-141, its tolerability profile and its ability to cause significant erections in patients who do not have an adequate response to a PDE5 inhibitor suggest that PT-141 may provide an alternative treatment for ED with a potentially broad patient base. 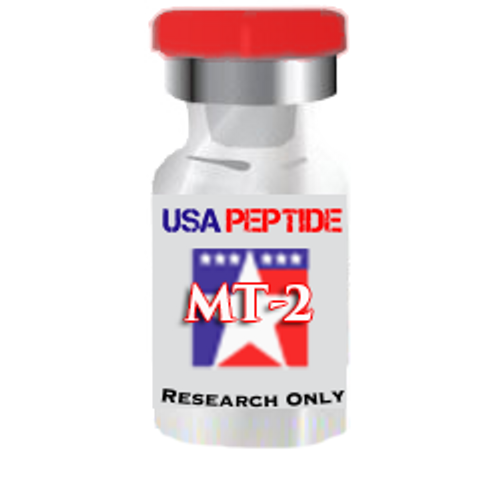